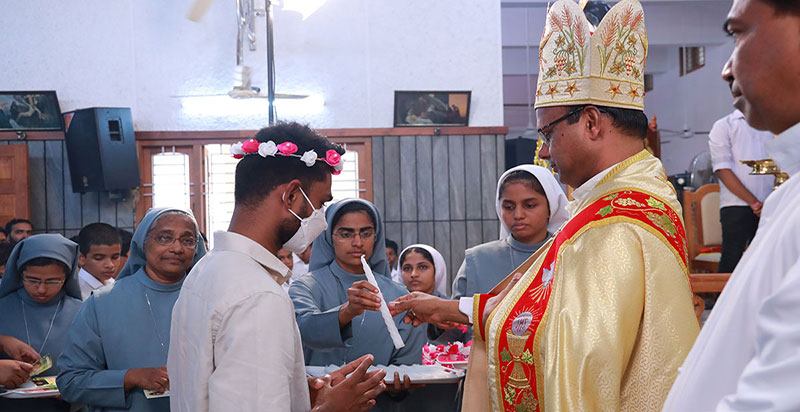 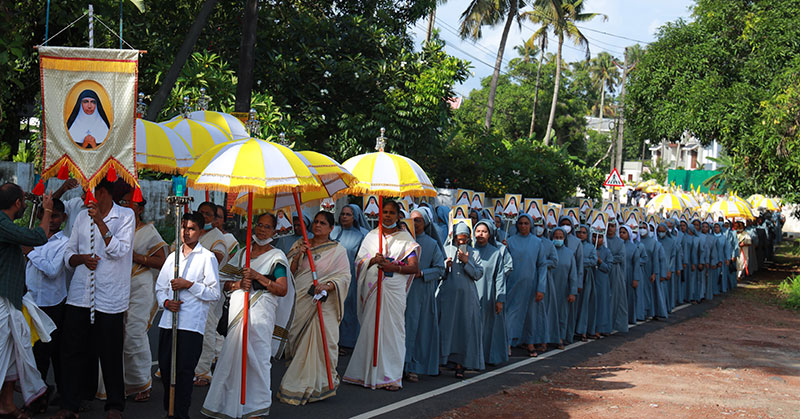 A significant contribution had been shown by an eye-catching procession by the local people from Kuzhikkattussery and CHF sisters. St. Mariam Thresia flag was hoisted by Mar Andrews Thazhath, the Arch Bishop of Thrissur and a solemn Eucharistic celebration was followed by him. He enriched every one by giving a befitting homily on Family Apostolate and the importance of family life. 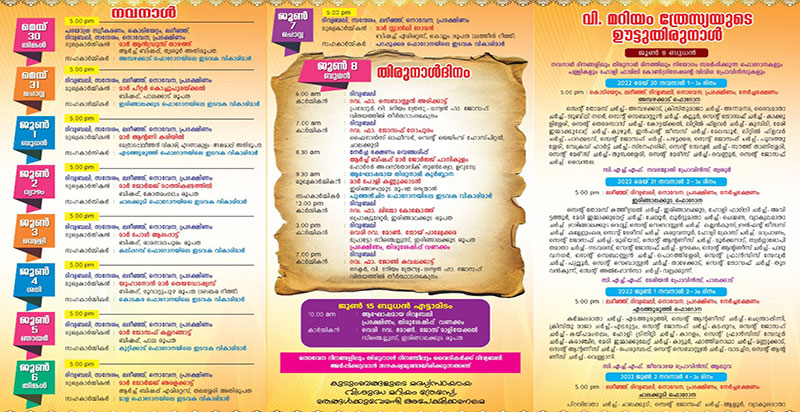 By the Strenuous effort of the General Council sixty-nine Local Superiors of the North Indian mission were gathered together in Holy Family Bhavan at Bangalore. They were given spiritual inputs by efficient personalities and we thank God for the mighty deeds He has worked for them. Hearty congratulations to everyone and God bless. 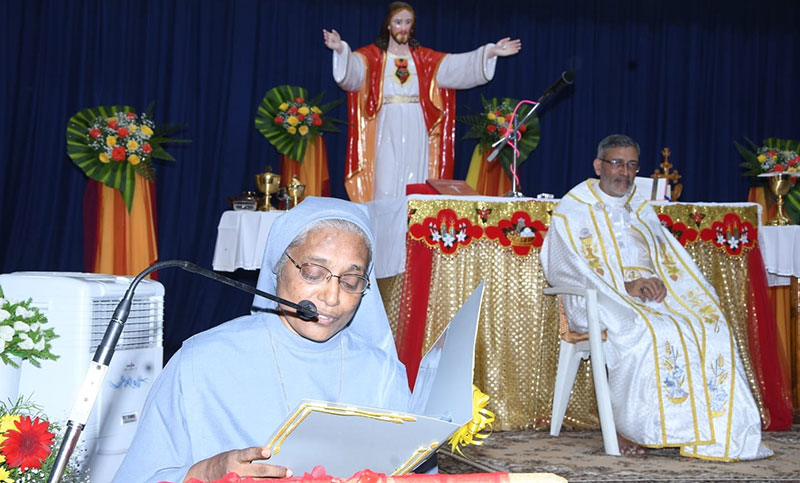 We are filled with immense joy and gratitude to God for the tremendous love, He has shown to the congregation of Holy Family during the inauguration of Arogyamatha Vice Province, Coimbature on 28 May 2022. During solemn celebration of Holy mass by Mar Paul Alappat, Bishop of Ramanathapuram, Very Rev Mother Annie Kuriakose CHF, the Superior General officially declared about the erection of the Arogyamatha vice province. Hearty congratulations and prayerful wishes to very Rev. Sr. Ruby Varghese the Provincial Superior and her teams and the members of the vice province. 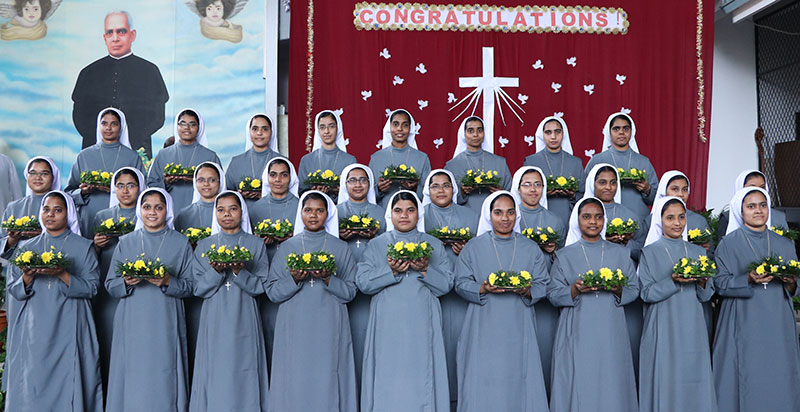 It is with a great spirit of rejoicing and thanksgiving twenty-seven of our junior sisters made their final commitment during a solemn Holy Mass celebrated by Mar Sebastian Puzholiparambil at Holy Family Generalate Mannuthy and the Superior General Mother Annie Kuriakose received their vows. The spirit of “Dare and Hope” inspired them to even greater heights with enterprising zeal to commit themselves in the hands of God. Hearty congratulations to all of them.

It was an important milestone in the lives of our junior sisters who gathered together in Velur for their spiritual enrichment programme. The congregation could impart to them new impetus to their calibre which enabled them to look forward with courage and optimism. On 13th May they renewed their vows during a solemn liturgical celebration where Superior General Mother Annie Kuriakose CHF received their vows. Hearty congratulations to them.

It was a momentous occasion that 170 local superiors of the Congregation of Holy Family gathered together in Holy Family Generalate on 2 May 2022 for their spiritual energizing programme for 10 days. Rev. Mother Annie Kuriakose CHF and many other eminent personalities shared their wisdom and knowledge and boosted them.

An excellent and exuberant group of silver Jubiliarians of the year 2022 gathered together at Holy Family Generalate for 10 days Jubilee course. The Congregation raises its heart in jubilation and gratitude to God Almighty for His infinite mercy for the silver years of Grace. A solemn Holy Mass was celebrated by Fr Joson Padikkala CMI in the Holy Family Generalate Chapel to thank God and there after a mesmerising cultural fiesta and cherishing agape.

A convocation ceremony was held on 11 April 2022 for the FAC group 2022. Eleven students from four congregations and two brothers from Delhi Arch Diocese participated in the programme. The course co-ordinator Sr Jhoncy CHF gave a red-carpet welcome. A special felicitation was given by Sr Sangeetha CHF the Director, FATRI Gurugram. The certificates were distributed by Sr Ancy Anto CHF, the General Councillor during a colourful entertainment by the FAC Students.

In the foot hills of Nepal, our sisters conducted Home Mission for twenty days in the month of February 2022. Sisters preached the word of God among Catholics and prepared them for confession and the Holy Eucharist. It was a great Mission they did with lot of challenges. The people were very happy and created good rapport with them. They requested sisters to come again to help them to sustain their faith. 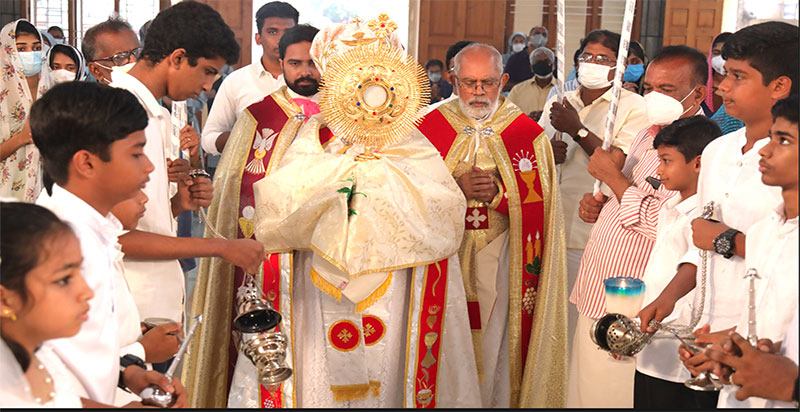 40 hours of Adoration was conducted in St Mariam Thresia and Fr. Joseph Vithayathil pilgrim centre at Kuzhikkattussery. Now in the fitting time to journey together, believers and all people of good will. Do not leave it for tomorrow. That is what the Holy Spirit does. People from different parts of Kerala floating to Kuzhikkattussery to take the touch of the Lord. It was gorgeous to see people bending on their knees and praying earnestly to get the blessings of the Lord.

The Convocation ceremony was held for our one-year theology students on 11 March 2022 at Puthenchira Theologate. Rev. Fr. Sujan Amurutham the president of Pontificate institute of theology and philosophy Aluva, gave away the certificates for the meritorious students. 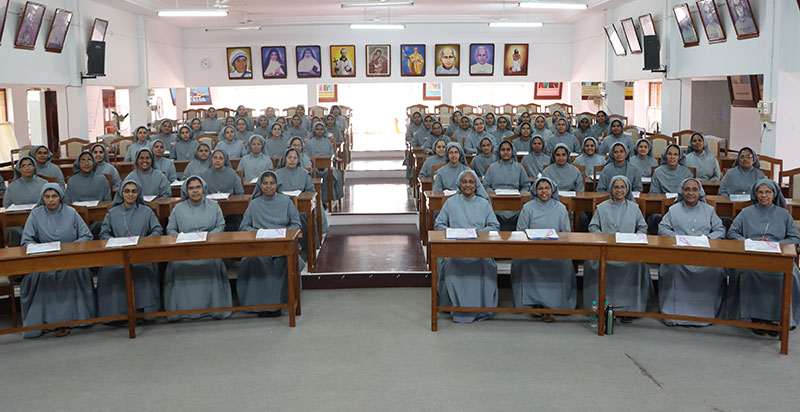 Youth Assembly of CHF Sisters was held on 01 March to 07 March 2022 at Holy Family Generalate, Mannuthy, Thrissur, Kerala. It was inaugurated by Sr Dr Annie Kuriakose, Superior General of the Congregation of the Holy Family. The theme of the Youth Assembly was CHF- Custodian of Families filled with Trinitarian love. Rev. Dr Martin Kallungal facilitated the Youth Assembly members throwing attention to the topic. The Assembly members actively contributed for its success. They had in depth group discussions and general sessions on various topics to give valuable suggestions and ideas and they submitted their Assembly Report to the authorities. 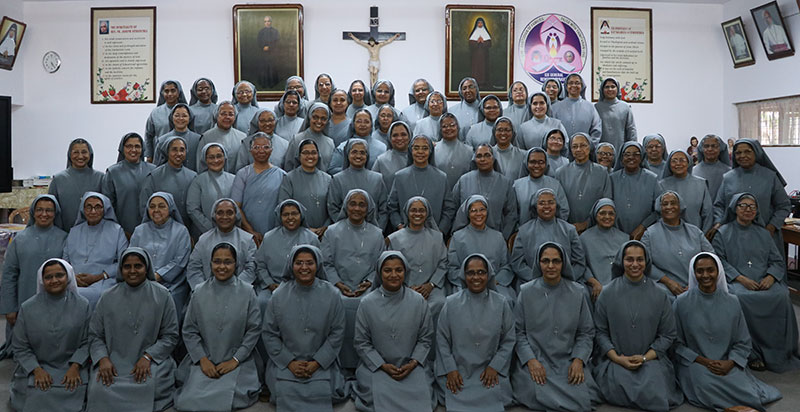 19 General Renewal Synaxis was commenced from 02 February to 13 February 2022 at Holy Family Generalate, Mannuthy, Thrissur, Kerala. It began with a prayer session followed by ice breaking inaugural address by Superior General Mother Annie Kuriakose CHF. The main theme of the Synaxis was CHF – Custodian of Families Filled with Trinitarian Love. Special sessions were held on many relevant topics for the spiritual and communitarian realms. The synaxis was given special topics to dealt with a few eminent persons. The Synaxis was also witnessed for many group discussions and general sessions to draw decisions and suggestions for the further better activities of the Congregation

Holy Family Congregation raises its hearts in jubilation and gratitude in unison with the nineteen Golden Jubilarians to glorify God for His infinite love and mercy. Mar Andrews Thazhath was the Chief Celebrant of the solemn liturgy. Many invited Priests and Sisters attended the stupendous liturgy. The Jubilarians were congratulated by staging a mesmerising cultural fiesta. 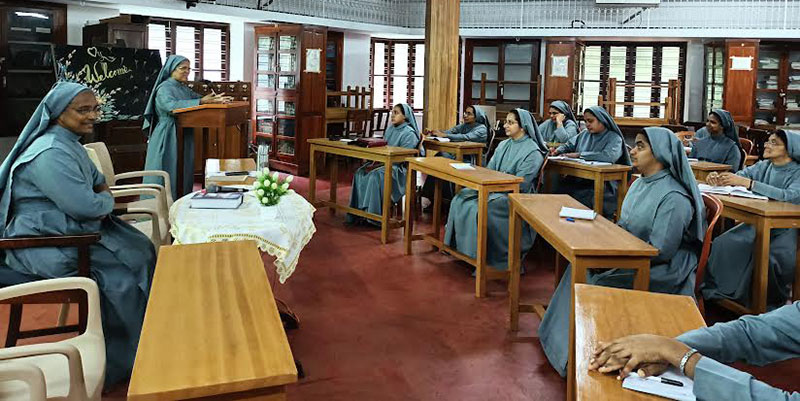 The Formators and vocation promoters meet was conducted for one day under the able leadership of Rev Mother Annie Kuriakose CHF the Superior General through the green initiatives of Sr. Rose Kavungal the General Councillor for formators and Sr. Abhaya Rose the General Formation Coordinator. Well-organized discussions and paper presentations were held and other inputs were given to them. 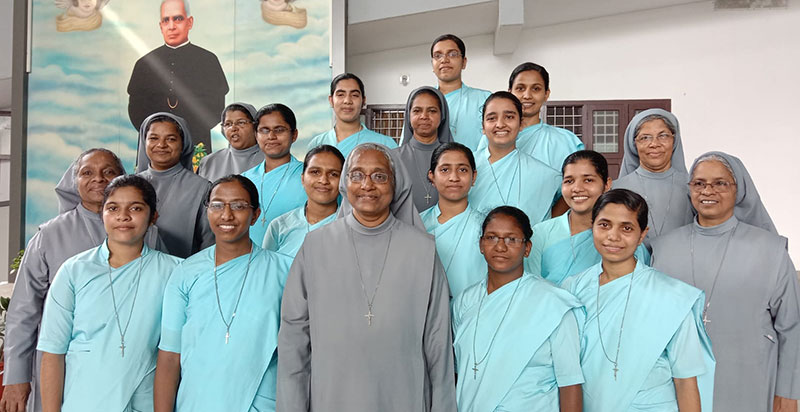 Twelve of our Postulants gathered together in Generalate, Mannuthy along with their directress Sr. Anet. On that auspicious occasion a fitting prayer service session was conducted and an entertaining culture afternoon was held after the fellowship meal. 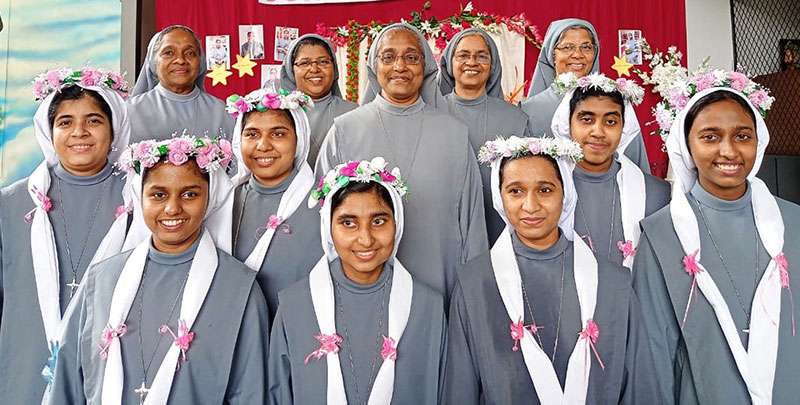 A momentous occasion was celebrated in Holy Family Generalate Mannuthy on 19 August as the newly professed Sisters were given a glorious welcome. We raise our hearts in jubilation and gratitude to glorify God for the young and vibrant members to the congregation. Hearty congratulation’s to our dear sisters.

Hearty congratulations to Sr. Daya George CHF for her Bible manuscript in both the language English and Malayalam.

A gorgeous and solemn Holy Eucharist was celebrated by Mar Pauly Kannookadan the Bishop of Irinjalakuda Diocese on 23 July 2021 at Kuzhikkattussery on the occasion of the Birthday of Venerable Fr Joseph Vithayathil the co-founder of the Congregation of Holy Family. Many could view the Live Programme through Shekinah T V Channel and St Mariam Thresia You Tube Channel. 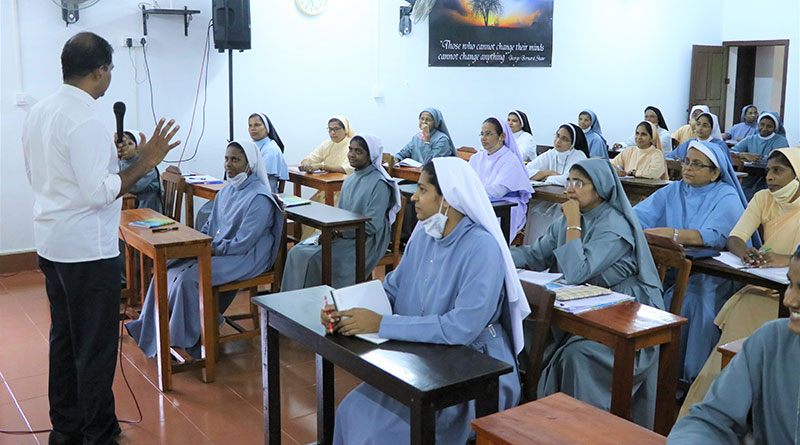 A qualitative timely counselling and Family Apostolate course was began on 15 July 2021 at our prestigious institution FATRI Veloor. There are 39 participants from 18 Congregations.

A befitting reception was given to our sisters in our Theologate and one year theology course was begun on 10 July 2021.

One year prayer group was given a charming and red carpet welcome and they entered into one year prayer on 10 July 2021 at Ekanthabhavan, Pariyaram.

Feast of St Mariam Thresia was celebrated on 8th June 2021 by Mar Pauly Kannookadan the Bishop of Irinjalakuda Diocese. Millions across the world watched the live programme through Shekinah T V channel and St Mariam Thresia You Tube channel.

34 Junior Sisters made their perpetual commitment during a solemn and ceremonial liturgy celebrated by Mar Pauly Kannookadan the Bishop of Irinjalakuda on 3 May 2021 at Puthenchira.

A Solemn Holy Eucharist was celebrated on 26 April 2021 at Kuzhikkattussery by Rev. Fr Lijo Kongoth , the Rector along with Rev Fr Sebastian Ezhekadan the Chaplain. The 145th Birthday was marked by lighting 145 candles. Superior General Mother Annie Kuriakose CHF delivered a befitting message for the august gathering at Kuzhikkattussery.

National Celebration and Thanksgiving of the Canonization!

16.11.2019 The day of National Celebration and Thanksgiving of the Canonization! The national Level celebration and the public meeting were inaugurated by His Eminence Oswald Gracias, the CBCI President. Inauguration of the Public Meeting was soon after the Holy Mass led by Cardinal George Alenchery at 2 p.m. Three cardinals, thirty Bishops and 300 priests and around 30000 people were present for the celebration.

Thanks Giving Mass was held at ‘Basilica of Saint Anasthasia’, Rome

14.10.2019 Thanks Giving Mass was held at ‘Basilica of Saint Anasthasia’, Rome at 10.30 a.m. on 14.10.2019. The main celebrant was Cardinal George Alencherry. Many Syro – Malabar Bishops and priests were present. There were around 700 people including sisters and laity and the lunch was arranged in the church premises for all the participants.

On 13 October 2019, at 10.30 a.m. Pope Francis Celebrated Holy Mass in St. Peter’s Square and presided over the canonization. The ceremony began with the reading of brief biography of the five persons to be canonized by Cardinal Giovani Angelo Becciu, the prefect of the congregation for the cause of saints, who then requested Pope to declare them Saints. Then the Sistine Choir led the singing of litany of saints after which Pope Francis read the solemn formula of canonization.

‘Vigil’ of the Canonization

12.10.2019 Celebrated the ‘Vigil’ of the Canonization in the Basilica of Mother Mary, Santa Maria Maggiore, Rome from 4 to 5 p.m. on 12th Oct. 2019. All the Syro - Malabar bishops from all over the world who had come for the Ad –Limina Visit were present. The church was filled with Priests, sisters and the people from different nations.

30.09.2019 Honorable Prime Minister Sri. Narendra Modi has expressed happiness that and an Indian , Mother Mariam Thresia will be declared as a saint, during ‘Mann Ki Baat’ (Heart’s Voice), his monthly radio program. He told that she had founded the congregation on May 14, 1914 to impart Christian values to the families.

09.09.2019 CHF Theological Institute at Puthenchira obtained the temporary affiliation of the Pontifical Institute of Theology & Philosophy, Aluva, for three years from the KCBC President. 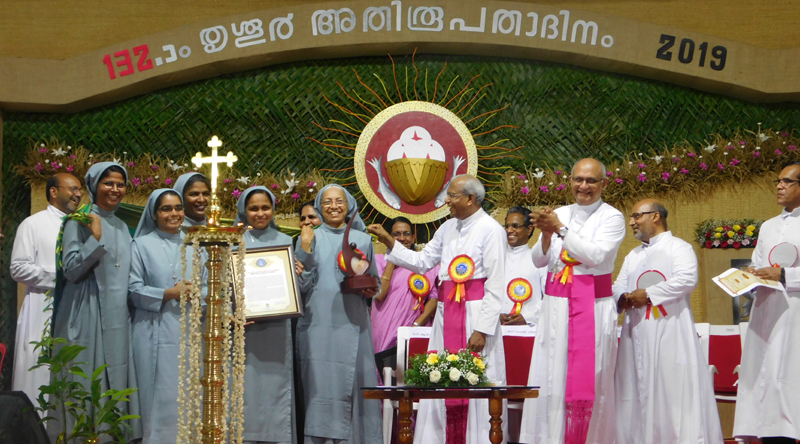